Function and interaction between endocrine system 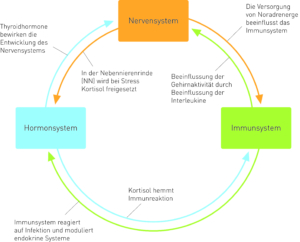 Human life crises, such as loss of a close person or divorce, can lead to loneliness, depression and anxiety. The immune system is influenced by these negative experiences. As already explained by Fritzsche and Wirsching, the nervous system receives information from the immune system in the form of cytokines, e.g. interleukin 1 (IL-1) and interleukin 6 (IL-6), interferon and tumour necrosis factor (TNF). The cytokines are activated in the infection procedure of the HPA axis.
This weakens the immune response to the infection. What causes the weakening of immunity?
If the T lymphocytes are weakened, the activity of the natural killer cells (monocytes, macrophages) is also weakened.
This creates the feeling (Sickness Behaviour) of listlessness, tiredness, loss of appetite and limb pain. (Fritzsche K, Wirsching M, 2006)

The immune system is inhibited by stress

The central nervous system controls the immune system. The hypothalamus and pituitary gland are superior to the adrenal cortex axis and control the neurotransmitters and neurohormones. Environmental pollution increases the stress hormone, which in turn weakens the immune system. 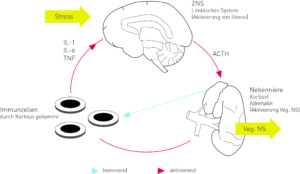 The hypothalamus and pituitary gland regulate the release of hormones.
Stress and psychosocial stress affect the CNS via the sensory neurons. As already proved by Fritzsche and Wirsching, the vegetative nervous system and the neuroendocrine system are activated during threatening experiences in order to be ready for fight or escape.
(Fritzsche K, Wirsching M, 2006)
In case of a disturbance of the hormonal system, e.g. hyperthyroidism, the patients suffer from anxiety and depressive mood.
Overproduction of glucocorticoids is accompanied by depressive mood, anxiety and memory disorders.
Patients with adrenal insufficiency suffer from fatigue. As Fritzsche and Wirsching already point out, in the case of depression the hypothalamus-pituitary-adrenal cortex axis is activated. This is called hypercortisolism. It means an increased risk of cardiovascular disease. Cortisone deficiency and reduction of immunomodulatory effects is a sign of chronic fatigue syndrome. (Fritzsche K, Wirsching M, 2006)
Nervous system and psyche
In stressful situations and under stress, the brain reacts in two ways, firstly via the immune system and secondly via the endocrine system.
Hypothalamus – pituitary – adrenal cortex axis
As already explained by Fritzsche and Wirsching, the corticotropin-releasing hormone (CRH) is released by the hypothalamus; the neurohormone responsible for the formation of adrenocorticotropic hormone (ACTH) is found in the pituitary gland. The CRH releases this hormone. This leads to the release of the adrenal cortex hormone cortisol and the formation of interleukins 1, 2 and 12 which inhibit the immune cells.
The interaction between the immune system and the brain causes on the one hand the immune cells with their interleukins to act on the brain via the afferent vagus, on the other hand the brain reacts through this interaction to the stimuli of the immune system with a reaction of the hypothalamus-pituitary-adrenal cortex axis. (Fritzsche K, Wirsching M, 2006)
This process creates a feedback mechanism that causes an excessive immune response. This reduces or eliminates inflammations. Failure of this mechanism, in the case of low release of cortisol into the blood, exaggerates the immune response. This is why autoimmune diseases are treated with cortisone. (Fritzsche K, Wirsching M, 2006)

The vegetative nervous system reacts much faster than the stress hormone cortisol. It owes the inhibition of the development of immune cells to efferent pathways of the sympathetic and vagus nerve together with the neurotransmitter acetylcholine. The reduction of inflammatory processes by the vagus is also known as cholinergic antiflammatory reflex. Therefore, there are therapies that work against stress: e.g. meditation, hypnosis, acupuncture, etc.. They have an activating effect on the vagus fibres. This leads to health-promoting, relaxing well-being.

The psychosocial experiences, as Fritzsche and Wirsching already emphasize, influence and act on the regulation of gene activity. Through experiences or experiences, genetic reaction patterns can be formed. Environment, organism and genes form one unit. The genes and the environment influence each other. Disease or mental health are not predetermined, but develop in part from interpersonal relationships and the regulation of gene activity.
If gene activity can be regulated, the production of proteins will also be improved. This plays a decisive role for the nervous, immune, hormonal and cardiovascular systems. (Fritzsche K, Wirsching M, 2006)

Transcription factors are the regulation of gene activity in which each gene is switched on or off separately by regulatory sequence.
These are signals that reach the gene from outside, either within the cells or the whole organism. In the brain, especially in the cerebral cortex, the regulation of genes is subject to signals from the outside world: nerve cell networks and the cerebral cortex modulate.
The limbic system, which is responsible for emotional and cognitive experiences, connects all these impressions. This system is also responsible for the process of regulation. It converts psychological experiences into biological signals.
In stressful situations, the brain transforms the transcription factors into biological signals that trigger an alarm system in the brain stem, activating the hypothalamus to trigger an anxiety response. The activation of a stress gene influences the cardiovascular system. Permanent stress has a negative influence on the immune system and can cause direct damage to nerve cells and the hippocampus. (Fritzsche K, Wirsching M, 2006)

⦁ Andrawis A (2013): The hidden part of the iceberg. A two-year patient analysis