Psychosomatic medicine (PSM) is the study of the interaction between the psyche and the entire body organs, as well as the development of psychosomatic disorders. The subordinate neurotransmitter system has a major influence on the development of various diseases, especially psychosomatic diseases, which are very difficult to detect. It can take several years until one recognizes mental disorders as such and does not find the trigger in the organ itself (Andrawis A, 2018).
The exchange in thinking and acting within the communication society takes place in a network system. The previously applied biomedicine will be replaced by a bio-psycho-social concept. Today, medicine sees psychosomatic disorders not only as a disturbance of the communicative tissue (vegetative nervous system, digestive tract), but also identifies environmental stress as a trigger. Individuality and culture, genes and society interact with each other. Ill-healing and healing events have an influence on human behavior. Not only medication can help with pain, but also new goals and the hope associated with them. As Andrawis has already pointed out, stress in working life or loneliness can lead to a weakening of the immune system (ibid.).

Author Asked the question of how mental experience and physical events are connected (…) was a recurrent theme. With the movement of psychosomatic medicine it became a scientific challenge in the 19th century and a therapeutic task in practice (Andrawis A, 2018).
The development of psychosomatic illnesses shows a correlation with overstrain, weight loss, changes in emotional-physical stimuli, as well as mental equilibrium and finally overstrain: From the physiological point of view of a body-mind-reaction they concern the autonomous-vegetative nervous system as well as the endocrine system, while the humoral content is the main factor. The increase in biochemical processes, such as in the pituitary adrenal axis, ACTH, glucocorticoids and cortisol, as well as serum triglycerides and cholesterol, can indicate stress reactions. Immunity changes in relation to the influence of the environment (ibid.).

As Tölle & Windgassen (2009) have already described, fatigue in healthy people is perceived as pleasant. The opposite is the case with those affected by psychosomatic disorders, which are under internal pressure and where symptoms of fatigue are often perceived as exhaustion. 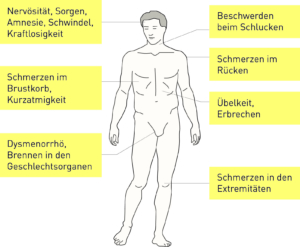 Diagnostics according to ICD-10 F and DSM-5 Code 300.82
The patients mostly complain about organic complaints, which often have a finding without reference to organic disease and psychological disorders in the background. As mentioned in Andrawis, there is an interaction between mental disorder and body organs. The following known forms of this disorder exist:
– hypochondriac disorder
– somatoform pain disorder
– Somatization disorder (Andrawis A 2018).
For Andrawis (2018), people with somatisation disorders are much more likely to suffer from depression and anxiety. Most of these mental illnesses of varying severity do not need to be diagnosed separately. However, if the symptoms persist for a long time, it is necessary to make a diagnosis.

This disorder is accompanied by excessive anxiety and fear that heavy physical exertion may be present even though there are no organic causes. In reality, about 14% of the patients of family doctors suffer from a hypochondriac disorder, of which men and women are equally affected (Möller et al. 1996).
Patients repeatedly ask for examinations to have their symptoms confirmed by a doctor and are prone to excessive drug abuse (ibid.).
With somatoform pain disorder, those affected feel permanently painful pain that cannot be explained physiologically. This pain is triggered by emotional and psychosocial components. Even with psychological disorders such as anxiety disorder, symptoms such as migraine and muscle tension can be the cause of increased pain in those affected.
With the so-called somatoform disorders, all functional body organs suffer. One can see the conversion disorders as part of the somatoform disorders. A large number of physical symptoms have been present for several years and have also been proven without organic findings. They affect up to 10% of patients in general practitioners, with almost only women meeting these criteria of the disorder. The relationship between men and women is one to two (ibid.).

According to Laux, somatized depression is the depressive episode that mostly occurs with physical complaints as masked depression. This means that it is not a clinical picture of its own. The diagnosis can be made after these symptoms have subsided. In addition, it is pointed out that medical findings, for example health examinations, as well as physical examinations and laboratory findings must be taken into account (Andrawis 2018).

The vegetative symptoms can also temporarily affect healthy people. These are tension, nervousness, sleep disorders, fatigue and concentration disorders. However, this does not exclude the possibility that a diagnosis for somatoform diseases exists. Characteristics for the diagnosis of a somatoform disorder are the development of a multitude of physical symptoms, whereby no organic findings are present. The psychological symptoms are in the foreground, such as depressive mood and anxiety (ibid.).
The risk of developing a real physical disease during the differential diagnosis of an organic disorder is as high in patients suffering from chronic somatization disorders as it is in all other people of their age. The doctor then decides to make additional consultations or examinations if the patients complain about constant changes in their complaints and therefore a real physical illness must be feared. Anxious disorders as well as affective and depressive complaints can occur as side effects of somatisation disorders (ibid.).

6.7 Diagnostics according to ICD-10 F

The following findings can be classified according to ICD-10F:
1) unconditional rejection of the expert opinion of physicians that the symptoms of the patients were not physical
(2) there must have been a large number of physical symptoms for at least two years which have not been confirmed by an organ test
3.) Disruption of family and social relationships due to the disease
The affected patients can also develop organic diseases at any time (ibid.). It should be noted that not only the multiple symptoms, but above all the human being as a whole physical and psychological complexity to consider.

It is important to help patients to find out where the symptoms come from and also to accept and understand the cause of the symptoms and to minimize the impact of family and social contacts. In addition, care should be taken to ensure that the dose of prescribed medication remains low and that there is no misuse of medication. The relevant goal of the therapy is to reduce medical measures and avoid surgery. In depth-psychologically oriented methods, such as psychoanalysis, it is the uncovering of the cause of mental disorders and their treatment. The focus will be on the misuse of drugs. Patients must be made aware that the side effects of the drugs must be considered sensitively. The psychotherapeutic treatment should be scheduled for a long time and be as continuous as possible in order to offer the possibility of a trusting and sustainable relationship between therapist and patient (Andrawis A, 2018). In psychoanalytic procedures, the neurosciences of the first half of the 20th century, as in the case of Bräutigam et. al., it is emphasized that several physical symptoms can manifest themselves as a conversion disorder. It is not only stress alone that can lead to the disease, but also environmental pollution and psychosocial components, since those affected often react so sensitively to stress that they are overwhelmed. Here psychotherapy plays an essential role in recovery (ibid.).
6.9 Other aspects of psychotherapy for relatives
For the relatives, information and education about the diseases and possible support through relaxation techniques, the relief of worries and fears through intercepted affects represent the most possible support to find a precise solution. Many positive results can be achieved by reducing anxiety in affected hypochondriac patients. As Ermann describes, change in life can be the cause of fear, such as fear of being left alone, fear of hospitals or everyday life, as well as morbidity and stress, which influence the vegetative control of body symptoms. In acute mental states, the administration of psychotropic drugs should be considered (Andrawis A, 2018).