The vegetative nervous system VNS. and the psyche

The vegetative nervous system VNS. and the psyche

Emotions and stress can have a negative effect on the heart and circulation and lead to diseases. The vagus nerve, a branch of the vegetative nervous system (see Fig. 4), can trigger psychogenic cardiac arrest. The vagus nerve is responsible for supplying the internal digestive tract, heart and lungs and controls all other internal organs. As already described by Rüegg, the VNS consists of three parts, the sympathetic nervous system, its opponent the parasympathetic nervous system (to which the vagus nerve belongs) and the intestinal nervous system. The latter has over 100 million nerve cells (neurons), much more than are located in the spinal cord. (Rüegg J C, 2003) 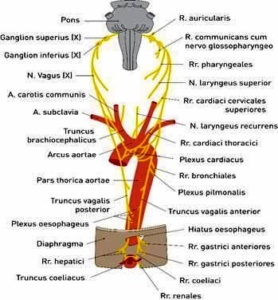 The vagus nerve is the X. It not only has a vegetative function but is also involved in the motor control of various organs such as the larynx, pharynx and upper esophagus. It transmits taste sensations from the base of the tongue and touch sensations from the pharynx, larynx and part of the auditory canal.

6.2 The autonomic nervous system and its two subordinate mechanisms

The Swiss Nobel Prize winner Walter R. Hess coined the term “defence reaction”. He proved by an animal experiment – weak electric shocks in the hypothalamus, in the lower part of the diencephalon, were transferred to an awake cat – that the cat showed anger and defense behavior and an increase of her blood pressure occurred.

As Rüegg already explains, some involuntary and vegetative body functions, such as body temperature, are controlled by the hypothalamus (cf. Fig. 5). The amygdaloid complex, the corpora amygdaloidea, which is connected to the frontal brain by nerve tracts, monitors the tasks of the hypothalamus. It is also part of the limbic system and lies above the diencephalon (Rüegg J C, 2003).

The corpora amygdaloidea is the place where emotions originate. He evaluates and directs messages coming from the sensory organs, regarding their character, e.g. in dangerous situations, very quickly, even before becoming aware of the danger. Psychosocial stress, which is associated with emotions such as fear, anger and rage, activates the defensive reaction in humans. This is initiated via sympathetic nervous system and hypothalamus.

6.2.1 Division of the brain into its main sections 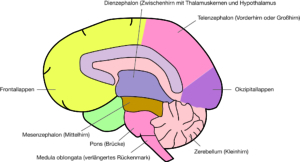 Fig. 5: Division of the brain into its main sections

The left and right cerebral hemispheres of the cerebrum are enveloped by the meninges, in their interior they contain the right and left cerebral ventricles filled with cerebrospinal fluid. Modified taken from: (Rüegg J C, 2003, p.3).

Two nerve cords run through the spinal cord: these are the pyramidal tract (descending tract, cf. Fig. 6) and the extrapyramidal tract (ascending tract) of the VNS.
As already Rüegg explains, the nerve cells of the sympathetic branch, which lie in the spinal cord, are excited by neurons in the medulla oblongata (a part of the brain stem) via the pyramid path. The latter in turn is influenced by hierarchically superior brain centres. The pyramidal track is the main part of the pyramidal system (PS). On the lower side of the medulla oblongata the fibres run on both sides of the spinal cord.
Between spinal cord and afterbrain 70-90% of the neurites cross to the other side (pyramid crossing Decussatio pyramidum).
The remaining neurites (Tractus corticospinalis anterior paramedian) run in the anterior strand of the spinal cord and cross into the contralateral side of the spinal cord. The rest remains uncrossed and ipsilateral.
The interneurons in the spinal cord are pulled by the PS and controlled by the motor anterior horn cells. Some fibres form direct connections, the so-called monosynaptic connections (Rüegg J C, 2003).

As described by Rüegg, the spinal cord neurons transmit messages received from the brain via axons (nerval projections) to the so-called sympathetic ganglia, which lie outside the spinal cord.
(see Fig. 7).
The peripheral sympathetic nervous system, the common final distance from the spinal cord to the target organ, consists of chains of two nerve cells each, the preganglionic and postganglionic sympathetic neurons. These are interconnected by synapses (neuronal contacts), which consist of the two cell membranes of the touching neurons and the submicroscopically narrow synaptic gap.

The membrane in front of the cleft is called presynaptic, the other postsynaptic. In the synapse, chemical substances are synaptically transferred from preganglionary to postganglionary nerve cells. The chemical substance, known as acetylcholine, is transmitted and released by electrical impulses (action potentials) when excited via the nerve endings of the preganglionic neurons.
Once acetylcholine molecules have passed through the presynaptic cell membrane, they spread to the opposite side of the synaptic cleft and reach the cell membrane of a postganglionic sympathetic neuron within a thousandth of a second. There, a specific binding to protein molecules of the postsynaptic cell membrane is formed, whereby the acetylcholine receptors adapt to these molecules. If the receptors are occupied by acetylcholine molecules, the receptor molecules are activated and thus the postganglionic neurons are influenced by “depolarisation”. At rest, the cell membranes of these neurons are polarized, i.e. they are positively charged on their outer side and negatively charged electrically on their inner side (ebd.).

The postganglionic sympathetic neurons are electrically discharged by the influence of acetylcholine and trigger action potentials. These are transmitted from the cell body of the neuron in the sympathetic ganglion at a speed of one meter per second to the nerve endings in the sympathetically innervated target organs. Noradrenalin is released, which, as Rüegg explains, is bound to the adrenergic or noradrenergic receptors of the target organs and triggers a noradrenergic organ reaction, for example a vascular constriction, which also occurs when noradrenalin reaches the vascular muscles via the bloodstream.
The sympathetic nervous system and the parasympathetic nervous system consist of two-cell neuronal chains (cf. Fig. 7). In parasympathetic ganglia the interconnection of the pre- and postganglionic parasympathetic cord neurons takes place (ebd.). 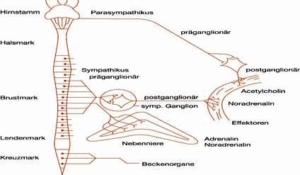 Schematic representation of the peripheral nervous system.
Right: Two-cell neuronal chain in the parasympathetic vagus nerve.
Middle: Schematic representation of the course of a preganglionic neuron of the sympathetic nervous system from the spinal cord to the medulla of the adrenal glands and to the postganglionic neuron which innervates the target organ (e.g. heart or blood vessel). Parasympathetic and sympathetic systems influence the target organs (effectors) by releasing the neurotransmitters (noradrenalin or acetylcholine). The adrenal medulla releases 80% adrenaline and 20% noradrenaline into the blood.
Left: Brain stem and spinal cord with the regions of origin of the sympathetic (lumbar and thoracic) and parasympathetic (cruciate and brainstem) systems. Modified taken from: Rüegg J C, 2003, p. 59 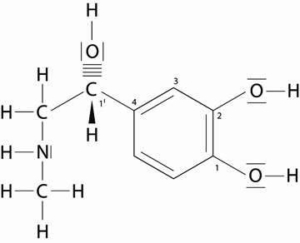 Modified adopted from Löffler G, 2001, p. 481
The formation of adrenaline and noradrenaline takes place in the adrenal medulla. Both are important stress hormones. Adrenaline is also produced in certain nerve cells, the so-called sympathetic ganglia. In the event of a release of adrenaline, noradrenaline is also released in a 4-fold smaller amount. Adrenalin is one of the most important hormones of neurotransmitters and also belongs to the group of catecholamines. Dopamine and norepinephrine also belong to this group and have a similar effect. In case of danger, they transmit signals. Anger and fear activate the sympathetic nervous system and the adrenaline level rises up to 10 times. This activates the metabolic processes and increases the blood sugar level. The blood pressure also fluctuates in time with the pulse and rises to its highest value at each heartbeat (systolic blood pressure). This corresponds approximately to the pressure of a 120 mm high mercury column. Finally, the value decreases and reaches its lowest point (diastolic blood pressure, approx. 80 mm Hg). Pathological blood pressure (hypertension) occurs when the systolic and diastolic blood pressure values exceed 90 to 140 mm Hg in the resting phase (exception: 95 to 160 mm Hg in older people (Andrawis A, 2011).
Medications that have an inhibitory effect on adrenaline and noradrenaline lead to a lowering of blood pressure.

In case of danger or threat, a signal and emergency reaction activates the sympathetic nervous system. The adrenal glands react by releasing adrenaline into the blood. As a result, the amount of blood flowing from the heart (the cardiac output) and systolic blood pressure increase. As Rüegg already explained, this happens by increasing the sympathetic tone, because the flow resistance in the circulatory system increases due to a narrowing of the blood vessels. In the case of neurogenic high pressure, an increased frequency of neuronal impulses occurs in the sympathetic nerve fibers. In stressed people, the noradrenaline level is increased and a narrowing of the blood vessels is the result.
The reason is the strong reaction of the vascular muscles to norepinephrine (Rüegg J C, 2003).
Which cell physiolological and molecular mechanisms cause the better signal transmission of noradrenergic synapses between nerve endings and blood vessels in case of overactivation of the sympathetic nervous system?
As already described by Rüegg, the sequence of the impulses (action potentials) in the postganglionic nerve fibers is important for the transmitter release. For this reason, the influence of the sympathetic nervous system increases the flow resistance in the vessel, which increases blood pressure (ebd.).
The number of storage vesicles in the nerve endings is of great importance for signal transmission. How quickly neurotransmitters are replaced and the memory refilled plays an important role. Only 80% of noradrenaline can be released and pumped back into the storage vesicles. The remaining 20% will be replaced by a new synthetic production. Disharmony caused by stress between the activation of the noradrenaline level and the transmitter production via the sympathetic fibres causes a change in the blood plasma (ebd.).

As Rüegg explains, neuropeptide Y (NPY) (acetylcholine and peptidic KO transmitters) is released in the preganglionic nerve endings. Neuropeptide Y causes the increased formation of cyclic adenosine monophosphate (cAMP), an intracellular messenger substance in postganglionic neurons. This leads to an activation of protein kinase, an enzyme that transfers a phosphate group from adenosine triphosphate (ATP) to the tyrosine hydroxylase molecule. ATP causes the phosphorylation process. The result is an optimal regulation of the synthesis of noradrenaline and an adaptation of the content of the available transmitter to the changing conditions of neuronal activity.
This regulatory mechanism takes place not only in the adrenergic neurons of the central nervous system (CNS), but also in the sympathetic ganglia. As a result, the cerebral adrenergic transmission of signals during stress and the tyrosine hydroxyl reactivity in the brain is increased in the long term. The messenger cAMP not only increases the enzymatic activity of tyrosine hydroxyl reactivity, but also the expression of a hereditary factor of the hydroxyülase gene in the cell nucleus, which is responsible for the production of the enzyme, in the case of stress and chronically increased sympathetic tone.
This increases the number of enzyme molecules in the nerve cells and the noradrenaline content in the storage vesicles of the postganglionic neurons increases. This condition is maintained for a few days.
The after-effect of stress lasts for a long time. Thus with each nerve impulse more noradrenalin is released at the sympathetic nerve endings than ever before and the signal transmission from the sympathetic nervous system to the smooth muscles is improved. BP’s rising. In the postganglionic sympathetic neurons, activity-dependent changes have effects on the neuronal plasticity of the CNS or sympathetic nervous system.
The expression (synthesis) of tyrosine hydroxylase also increases in the brain during stress (ibid.).

⦁ Andrawis A (2013): The hidden part of the iceberg. A two-year patient analysis, final thesis Specialized in psychoanalysis