During the depressive phase there is a high risk of suicide in 40-80% of patients. 15% of patients commit suicide, 20-60% have attempted suicide. The external appearance of a depressed person shows a serious, frozen facial expression, a quiet voice, a lowered gaze, a hesitant way of speaking (Laux G, 2001).

An inhibited depression expresses itself in a limited psychomotor activity, in a reduced activity and in a severe case, in a depressive stupor.

The main symptoms of depression are as follows: agitation, hectic, unproductive behavior, moaning.

A tomato depression is a vegetative and psychosomatic disorder (ibid.). 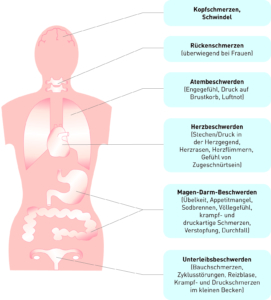 The anancastic depression is expressed, as already Laux describes it, in exaggerated orderliness, conscientiousness and compulsive symptoms. This includes the “Sisi Syndrome” named after Empress Elisabeth. It is found in about one third of the women affected. This leads to restlessness, physical hyperactivity, volatility, rapid mood swings, fasting, exaggerated body cult, self-esteem problem and self-treatment attempts. (Laux G 2001)

In the case of bipolar disease, drug treatment is necessary, which will certainly take a long time. As already mentioned by Ebert and Loew, relapse prophylaxis is unavoidable as a long-term therapy. These measures should be started within one year after the symptoms have subsided. In the event of a relapse, the therapies are repeated. The episodes can be reduced and a permanent absence of symptoms is achieved. (Ebert D, Loew T, 2011)

Depression is treated by psychopharmacotherapy with antidepressants. As Frank points out, it is also recommended to take advantage of psychotherapy, but this only makes sense after the acute phase. In the acute episode an inpatient stay is necessary to ensure intensive therapy and to avert the risk of suicide. In the case of less severe forms, outpatient treatment is often sufficient, especially if reliable relatives monitor the patient. The patient himself should not expose himself to any occupational stress – not even road traffic. (Frank W, 2007)

Once the diagnostic criteria have been met, it is important that internal and neurological examinations begin. As already described by Laux, the blood count is determined in the laboratory (liver, kidneys, electrolytes, blood sugar, cal, thyroid values, vitamin B12 levels, serum iron levels), EEG, CT, possibly NMR, brain scintigraphy, SPECT, rCBF, Doppler sonography follow. A dexamethasone test should possibly be carried out in the event of a remission of depression. Standardized evaluation scales facilitate the evaluation of the severity of the disease. (Laux G, 2001)

I would like to describe the causes, symptoms, diagnosis, therapy and the course of bipolar affective disorders in more detail using the example of a patient whom I got to know during my clinical experience at the University Hospital Vienna AKH.

The patient Mrs. M., accompanied by her family doctor and his wife, with whom she had a friendly relationship, came voluntarily to the ward for admission. Although she was not very ill-inspiring, her family doctor was able to motivate her to stay in hospital.

At the time of the recording, Mrs. M. was clearly restless. She indicated a strong inner restlessness, which also manifested itself in a clear motor restlessness, whereby she often got up from the armchair during the anamnesis and walked up and down the room. Her thought process was accelerated, prolix, and sometimes she jumped from one thought to the next. Her concentration and memory function were significantly reduced. The mood fluctuated strongly between euphoria and irritation. She reported sleeping in and out, with the subjective feeling of needing less sleep lately.

Recognizable from their data and from the medical history, hospital stays due to manic episodes have been frequent in recent years. The last photo was taken after the patient drove the car against a one-way lane, when the police tried to stop her, fleeing and causing a dangerous chase. In addition, she had to be accommodated twice for verbal and violent aggressive outbreaks, in the sense of a foreign endangerment according to the Housing Act (U. b. G.).

In recent months, Mrs. M. had stopped taking her medication regularly and had consulted her specialist less frequently, which led to another outbreak of a manic phase.

After also several depressive phases were explorable and known, the diagnosis bipolar affective disorder with present manic episode was made (ICD-10 F31.1.1).

Appearance of the mania in patient M.

As Dilling et. al. describe, the manic can also be opinionated, irritable, even aggressive, as was the case with Mrs. M.. She is also easily distracted, jumps in thought from idea to idea, can also be very witty and quick-witted. She is often loud, lively, restless and full of daring. Early on, the urge to speak and write, a reduced need to sleep, shopping frenzy, anger and greed for contact, especially constant telephone conversations, are noticeable. The maniker tends to inappropriate confidentiality, even towards strangers, boasts, social “slips”, swindles and is often intrusive, challenging, distant, impudent and sometimes sexually disinhibited. The social and societal consequences are often severe. The aforementioned shopping frenzy can lead to financial ruin and often leads to serious disputes with relatives, acquaintances, superiors and authorities. In the end, separation, divorce, dismissal, debts and a ruined reputation are often the result. (Dilling H, Mombour W, Schmidt M H, 2008)

Some of the above symptoms were observed in Mrs. M. during the recording and subsequent conversations.

In the patient Mrs. M., the family history had shown that the mother was being treated for a recurrent depressive illness. One of her sisters was also suffering from a severe depression, partly with mutistic pictures of her condition.

Likewise, critical life events – so-called “life events” – play a decisive role in triggering an affective disease. According to the patient Mrs. M., she recently had to make a massive incriminating separation from her current partner, which she described as a massive incriminating separation. In addition, she had to struggle with enormous time pressure within the scope of her profession and was not able to deliver her work on time lately. The depressed person sees himself and the world around him negatively. Mrs. M. also indicated suicidal thoughts at the time of admission, but these were not yet more concrete. In the past, however, she had already attempted suicide, which was recognizable by a cut on her wrist.

In 1960, several research groups found that reserpine leads to a reduction in the concentration of various biogenic amines in the central nervous system. As Frank already explained, 10% of hypertensive patients who received reserpine had a depressive phase during treatment (Frank W, 2007).

As Frank explained, psychiatric disorders are associated with dysfunction in neurotransmitter systems of the brain, depression and anxiety disorders with the neurotransmitters serotonin and norepinephrine, but also with substance P or gamma-aminobutyric acid (GABA). OCD is associated with the serotonin system, schizophrenia with the transmitters dopamine and glutamate. Dopamine also plays a role in addictions. From a behavioural perspective, depression can be seen as a disorder of self-perception, self-evaluation and self-strengthening (Frank W, 2007.)

Therapy and Course for Patient M. – As part of my clinical assignment at the University Clinic in Vienna AKH:

On the ward, the adjustment was made to valproic acid, a mood stabilizer and an atypical antipsychotic, which caused the manic symptoms to subside. The initially extremely strong drive quickly returned to normal and Mrs. M. spent ever longer breaks in bed. In addition, Mrs. M. needed shielding from external stimuli and clear structures. In numerous conversations Mrs. M. made the recent manic episode the topic and for the first time showed great interest in understanding her illness correctly. She also participated intensively in the therapeutic program on the ward, which consisted of occupational therapy, physiotherapy, psychotherapeutic individual and group discussions.

In the context of the therapy discussions

The patient’s difficulty in disciplining herself or trustingly accepting others who could help her with another outbreak of mania became clear. There was also a family conversation with the parents and the sister, as well as a conversation with her former partner, with whom she still had contact. In the sense of psychoeducation, the family was also informed about their illness and the importance of recognizing early signs.

Mrs. M. wanted more independence from her family and felt very lonely after her separation from her partner. It was discussed with her whether she might switch to a less stressful job and participate in a self-help group. She decided to go into psychotherapy and it was possible to arrange an appointment for the first performance during her stay.

In addition, the need for regular medication and specialist medical care were discussed with her on several occasions. She was also reminded that the recurrent bipolar disorder requires long-term therapy over several years and that reducing or discontinuing medication without medical consultation can lead to a recurrence of the disorder, and that she was then able to slowly expand the day and night exits from the ward, which went smoothly, and be discharged in a stable condition.

In my opinion it is necessary to recognize and treat mental illnesses much earlier. It would also be important for more people, especially from socially deprived families, to have access to psychotherapy on health insurance. From my experience in child and youth psychiatry – very many children are accommodated in residential homes and flat-sharing communities – it would make more sense to treat the affected children more intensively with psychotherapies and leave them in the family as long as possible.

Even in companies where things are very stressful, it would be desirable for employees to be able to process their stress within the framework of supervision by a psychotherapist.